Home›Exchanges›What is a bull flag chart pattern and how to spot it?
Exchanges

What is a bull flag chart pattern and how to spot it? Many security price forecasters use technical analysis, sometimes referred to as charting. However, they opt to reject the efficient markets hypothesis (EMH) altogether. The efficient markets hypothesis (EMH), also called the Random Walk Theory, is the idea that current securities prices accurately reflect the information about the firm’s value. Therefore, it is impossible to make excess profits using this information, or gains that are greater than the overall market.

On the contrary, technical analysis disregards the EMH and is only interested in the price and volume behavior of the market as a basis for price prediction. A technical analysis pattern called the bull flag is a recognized price pattern and is thought to indicate that a price increase is about to occur.

What is a bull flag chart pattern?

A bull flag chart pattern is a technical chart pattern that resembles a parallelogram-shaped flag with masts on either side and indicates a trend consolidation. It happens when prices fluctuate within a small range before and after dramatic jumps or falls. So, is a bull flag bullish?

A bull flag pattern is characterized by a flag of consolidation that is horizontal or sloping downward and is followed by a substantial increase in the upward direction or the breakout. In volatile cryptocurrency market conditions, traders use crypto trading strategies like swing trading and a bull flag pattern for trading during a strong trending market or after a breakout.

Furthermore, the bull flag pattern’s primary goal is to enable you to profit from the market’s current momentum. As a result, crypto traders may use the data it offers to identify entry points with low risk in relation to potential rewards.

How to spot a bull flag pattern?

The bull flag pattern resembles a flag on a pole when seen on a chart, and because it represents an upswing, it is referred to as a bullish flag. In traditional or crypto trading, a bull flag pattern has three main features (see figure below):

But, how to read a bull flag pattern? A bull flag pattern aids in locating the places that require correction before the prior trend resumes. This chart pattern requires the presence of the previous momentum, which is typically shown by a string of consecutively bullish bars to the upside.

Later, consolidation should be used as remedial action in a crypto trading process. Price corrections are frequently framed by pennants, downtrend channels or sideways movement. The pennants in a triangle form represent converging trend lines, which happen when a trading range is formed with subsequent highs and lows.

Related: What is a bull trap and how to identify it?

The break of the flag, which occurs in the third stage of the bull flag pattern, offers the optimal entry signal. The previous swing high will serve as the initial profit objective for the bullish flag pattern, and the consolidation structure might serve as the stop-loss level.

To spot the bull flag pattern, follow the steps below:

How to trade the bull flag pattern?

In a bull flag pattern trading, crypto traders place the entry where the structure that frames the flag (or the downtrend channel) fails to maintain its downward momentum after the bullish pattern has been spotted.

The trend will likely continue if trade volumes increase following the pullback and the price crosses the upper threshold of the bull flag. However, the bull flag’s support line should be below the stop-Loss order, and traders use the risk/reward ratio to determine the take-profit threshold. So, how reliable is a bull flag pattern?

Even though the bull flag pattern tells about a continuation pattern, the trader’s risk-return profile determines the success of any crypto trading strategy. Moreover, reward or loss depends on investors’ investment goals and if one understands the signals for trading bull flag patterns, such as rising cryptocurrency prices on high relative volume or if prices exhibit a distinct pullback pattern as they consolidate at or near highs.

A bull flag is comparable to a bear flag, with the exception that the trend is upwards. An intense rally followed by a flag-shaped trend halt helps traders identify bullish flag formations. On the contrary, a bear flag pattern is created by a bearish or downward trend (also known as the flagpole), which is followed by a lull in the consolidation zone (also known as the flag) or trend line.

The differences between the bull and bear flag patterns are listed in the table below: 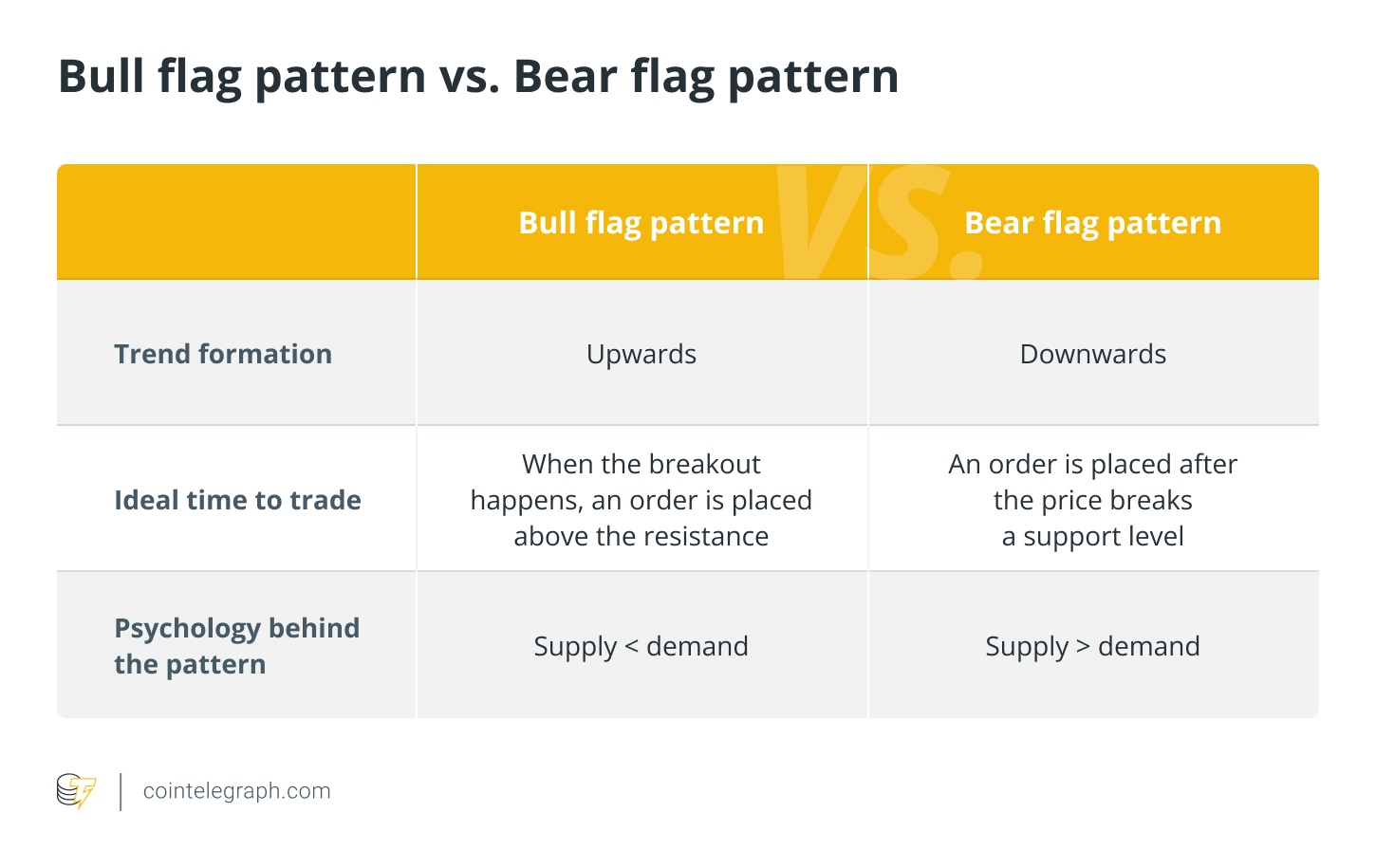 Due to its volatile nature, traders can spot both bullish or bearish flag patterns to trade long or short, depending upon their risk-return profile.

Related: What is a bear trap and how to identify it?

Benefits and risks of a bull flag pattern

A bull flag breakout offers a transparent price level at which traders can place a long trade. In addition, it guides when to put the stop-loss order, giving the necessary support for effective trade management. Moreover, as discussed above, the signals to identify bullish pattern trends and the procedure to spot them involve simple steps.

Despite these advantages, it is not to say that following a bull flag pattern is a risk-free crypto trading strategy. That said, where money is involved, the risk of loss follows. For instance, one of the most significant risks associated with trading cryptocurrencies is the possibility of price instability and market swings.Therefore, investors should always understand the risks-returns of a particular investment to avoid experiencing negative results executing bullish or bearish patterns.

US SEC Probes Yuga Labs to Determine If Bored Ape NFTs Are ...

It’s time for the feds to define digital commodities