Who are these OGs exactly? Unlike the rich and powerful in the traditional finance and conventional tech sector, crypto OGs are often protected by a layer of decentralized anonymity in a particularly wild corner of cyberspace. Who deserves this mythical label? The year they got into crypto? Their current net worth? Their lifestyle? Their impact on the industry?

How can you separate the randos and wannabes from the OGs? Without further ado, here’s our guide to spotting OGs at any networking party, written with insider tips from real-life OGs.

These are the OGs that look underwhelmingly and deceptively average.

In New York and San Francisco, they’re the ones going around like starved college students, burying their heads under a hoodie and nodding to electronic beats from their headsets on a subway train. In Singapore, they are the ones blending in seamlessly with any given “uncles” at Kopitiams, wearing nondescript shabby shirts, slippers and Bermuda shorts.

These OGs are in crypto “for the tech”; they’re long tokens, and, hence, tend to be crypto rich but cash poor.

Inside the Iranian Bitcoin mining industry

“I don’t have fiat, I really don’t,” Cyclone* tells me. (*Cyclone is not his real fake name.) He’s a shadowy super coder and anon founder who has been collaborating, developing, advising and consulting for many critical projects since he discovered Bitcoin in 2012: from Lightning Network to landmark proto DeFi platforms, to algorithmic stablecoins, such as the infamous UST. He is currently tackling cross-chain, as he sees that as the next critical development in the industry.

I meet him over lunch at a humble coffee shop in Singapore, in between his trips to Europe and the United States. At the end, he fishes around for cash in his pocket to pay for a 5-Singapore-dollar meal. “Could you please cover that for me? I’ll pay back in crypto. What coins do you want?” he says.

This is from a man running a trading aggregator and exchange on Solana with billions in trading volume, moving millions of USDT and USDC regularly, and paying hundreds of thousands of dollars per month in Ethereum gas fees to run his other projects.

He used to have quite a significant Twitter presence almost a decade ago and was among the earliest batch of Crypto Twitter influencers but says the fame did not help him in any way.

“If anything, it only exposed me to potential scams, hacks, wrench attacks, fraud, cyber-bullying andlegal action,” he explains.

Ironically, anon devs trade on their reputations. Engineering and technical talent is probably the biggest bottleneck in the industry today, with a very limited number of talent who can actually execute a seemingly infinite number of random new project ideas. As a result, they’re paid extremely well, and they have the upper hand to only work for projects that ignite their passion.

Cyclone explains that crypto engineers, and especially the OG talent, know each other through underground social networking on Discord, Reddit, GitHub and so on. They know who is behind what project and can verify themselves if anyone is legit.

Introverted and a self-proclaimed geek, Cyclone hates networking parties. “You probably won’t find me in any of those. I don’t care and I don’t need it.”

They may not have the same underground appeal, but reputable OGs have contributed significantly to the industry since its early days.

Unlike the anons, these OGs actually appear in your Google searches and feature heavily in traditional finance media such as Forbes, Bloomberg and Time.

They joined or founded successful projects at the right time, which got bigger and more reputable over time to become legit companies or organizations with hundreds or thousands of employees. Anyone serious about cryptocurrency knows their names.

These are the likes of Vitalik Buterin, the creator of Ethereum; fellow Ethereum co-founder Joseph Lubin, who went on to found ConsenSys; the Winklevoss twins, who started the Gemini exchange; and Jihan Wu, who became a crypto billionaire from his former mining company, Bitmain.

These OGs are highly visible and easy to spot in a networking event, as they’re usually giving speeches and interviews.

“I think OGs are the people who have stood behind blockchain and cryptocurrency since its early days and had a concrete impact on the result or outcome of a project,” says Brian (not his real name), who contributed significantly to the infrastructure security of early centralized exchanges. He’s now the chief technology officer of a well-known blockchain infrastructure company that builds services for crypto developers and manages over a hundred engineers in his global team.

“Kidnapping for ransom has been increasing among crypto OGs,” he tells me, dead serious. Getting more media attention will not aid him in any way anymore. He’s too OG for any serious industry player not to have known of him.

The Invisible Man of the Visible World: How Blockchain Could Offer New Hope to Stateless Rohingya

Brian got into crypto in 2012 after being told about Bitcoin by some fellow engineers. He was skeptical, yet he bought a little bit. Since then, he’s drunk the kool-aid of the revolutionary promise of the blockchain.

“Just like everything else in life, there’s ebb and flow to our fortunes and life circumstances.”

Ebbs and flows are understating it, seeing how volatile the whole industry is. Brian adds that there’s a difference between whales and OGs.

“OGs are generally early and visionary, but it does not mean that all of them are rich,” he says.

“The definition of crypto whales is more clear cut. For example, a BTC whale should be able to impact the market, and I believe the definition is to own more than 1,000 BTC. However, not all BTC whales are BTC OGs, and not all BTC OGs are BTC whales. People lost their fortunes in all manners throughout the history of cryptocurrency: exchanges collapse, hacks, scams, robberies, wrong investments…”

Brian has made a life-changing windfall from cryptocurrency but still chooses to work hard each day, building the infrastructure of the industry.

I want to solve problems and impact others’ lives. I want to make meaningful changes, and I know I can.

He moved on from centralized infrastructure security because the problem was largely solved, with fewer and fewer successful hacks attacking centralized exchanges.

“You can compare this with smart contract hacks that happen almost every other day in the amount of hundreds of million dollars.”

Is he still drinking the kool-aid, 10 years down the road, through the ups and downs of the market?

“Absolutely. Nobody can predict how things will shape up, but one thing for sure: Blockchain will open up and democratize access to assets, properties, services and data. It will not be a perfect decentralization, but it will be a more open system than what we are currently seeing.”

Brian and OGs like him can be found making the rounds at parties, talking to lots of different people with different roles in the industry. “I am curious as to what others are up to and working towards. I want to know what others are building.”

3. The ones making a comeback

These are the OGs who have been embroiled in the downfall of large projects, with losses of millions and sometimes even billions in value, yet pick themselves and attempt to make a comeback.

“There is a difference between a failed founder and a scammer,” says Cake DeFi’s Julian Hosp, co-founder and media personality of the defunct crypto payment platform TenX.

Failed founders do their best, yet the project still fails anyway. Meanwhile, scammers and rugpullers are those who intentionally and fraudulently misrepresent their words and actions to gain investors’ trust. The former are not criminals, the latter are.

Founded in 2015, TenX’s app allowed users to store different types of blockchain assets in one place, as well as use its physical debit card to pay with crypto at retailers around the world. It raised $80 million in an ICO in 2017 and positioned itself as the first crypto credit card issuer.

However, in January 2021, TenX announced its decision to discontinue its services and shut down indefinitely. New signups were disabled, and members were told to withdraw all their funds from the TenX wallet.

As of the moment, despite a freeze on all activities, the company has not been wound down properly, and no one seems to know what happens to the treasury of TenX, which includes significant amounts of Bitcoin, Ether and fiat. It has not been subjected to any investigation or regulatory action, and nobody seems to have suffered any consequences.

There is a lot of finger-pointing and disputing over who is to blame, however. Hosp tells me that he was pushed out and bought out by his TenX co-founders — to his utter shock and disbelief — back in early 2019. “I did not know that they had been hatching to vote me out… I was presented with no other choice but to quit,” he says.

Reddit sleuths found out he was selling his governance tokens just before his departure and accused him of insider trading. He denies the accusations, saying that selling the tokens was part of his regular profit-taking strategy to pay for his income taxes, and his departure from TenX was completely unforeseeable. He also claimed that the reserves of the TenX funds from the ICO were not used to buy him out and puts any and all blame for anything that happened at the feet of his co-founders Toby Hoenisch and Paul Kittiwongsunthorn. (Hoenisch, by the way, has also been accused in Laura Shin’s book The Cryptopians as the hacker of the Ethereum DAO hack in 2016, without any hard proof.)

Towards my departure, I had seen things that troubled me…[a] lack of accountability that showed that they were not acting in the best interest of the company. Plus, now they are nowhere to be found. There is no accountability or reimbursement of investors’ money.

There are a lot of comeback OGs like Hosp in the crypto industry because it is often impossible to determine whether someone tried their best and simply failed or whether one was deliberately lying and scheming.

Prior to TenX, Hosp was a medical doctor and a kite surfer, and he was also involved as a network marketer for a controversial multi-level-marketing company Lyoness, whichwas subsequently ruled out in many countries as a pyramid scheme.

Hosp says he invested $100,000 dollars saved from his doctor’s salary into Bitcoin back in 2014 when it was just $400 apiece, and it was his life-changing investment.

I did not get rich from TenX, but from my Bitcoin investments. I have a long YouTube video explaining how I made $100 million and more from cryptocurrency.

Right now, Hosp is working and promoting his latest company, Cake DeFi, which he founded with fellow OG and former TenX engineer U-Zyn Chua with 50/50 allocation out of their own capital.

Cake DeFi is CeDeFi: a semi-centralized platform allowing users to invest and earn in the DeFi space with more transparency than Celsius Network for example.

“I have no fear of making a comeback because I did nothing wrong,” Hosp says.

Hosp tells me that he no longer needs to go to networking parties, but in any case, OGs making a comeback like him tend to be shamelessly charming public speakers, and you would have no trouble spotting them preaching to a mesmerized audience at any party, convincing them about their latest billion-dollar vision.

Part 2 is out later this week and features “NeoGs” like Sam Bankman-Fried, flashy influencers with Bitcoin bling and lambos and… everyone else who doesn’t fit a neat category.

The ethics of hiring cheap Filipino staff: Crypto in the Philippines Part 2

Crypto, Meet Fiat. You Two Should Get A Coffee Sometime 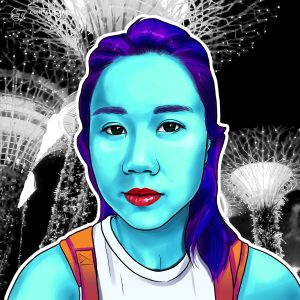 I was convinced in my latest ayahuasca ceremony that Web3 and Metaverse are legit future trends instead of passing buzzwords. So here I am covering the future.

Powers On… Insider trading with crypto is targeted — Finally! Part 1 ...